On May 1st, 2012 I embarked on an experiment at work — I started signing work emails to my team and friends inside and outside the office with the words “KTHXBYE” or “KTHXBAI”. The goal was to see how long it would take until someone mentioned or asked about it. About two weeks after I started the experiment a friend from Microsoft noticed it and mentioned it to me. Of course, I replied with a meme: 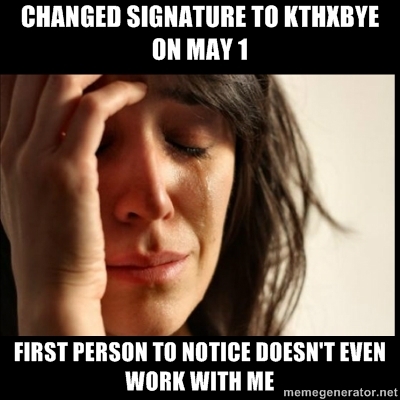 To which my friend at Microsoft was gracious enough to reply with a meme of his own. This experiment was clearly off to an awesome start. 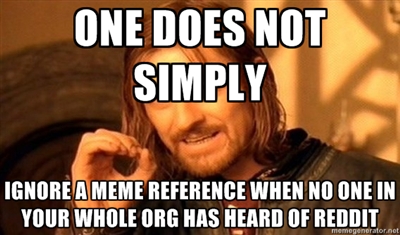 I expected that I’d hear back from other folks in a matter of days. But then the days turned to weeks and the weeks slowly turned into months. I concluded one of two things: either no one actually read my email, or no one actually caught the reference. Undaunted I persisted. Over the course of the experiment I sent out more than 450 messages with the signature “KTHXBYE” and about 65 with “KTHXBAI”, although I only realized that “KTHXBAI” was the appropriate spelling late into the experiment.

Finally, yesterday, March 5, 2013, the experiment came to an end. My manager asked about what it meant, and she googled the definition. Which, unfortunately led to the Urban Dictionary definition of “KTHXBAI”.

The Urban Dictionary definition of KTHXBAI

My response: “Ughh…”. This led to an explanation that Urban Dictionary shouldn’t be trusted and that, no, I wasn’t telling my co-workers to get bent at the end of every email. I had to introduce the whole concept of LOLCats, which thankfully was backed up by the creation of my 2007 intern project called LOLJazz, which somehow lingers on as a zombie inside of our Rational Team Concert Server. Still, I wasn’t out of the woods, there was the chance that it could still be “actionable”. This is where I had an ace up my sleeve. During the development of Watson, IBM’s Jeopardy! playing computer, the team, which happens to be in my organization, fed the entire Urban Dictionary into Watson. As could be guessed, the importation of Urban Dictionary into Watson led to many hilarious and wholly inappropraite responses. In short, Urban Dictionary was a cesspool and shouldn’t be used as canon. Rather in this case the Cheezeburger kthxbai is a much better source. A traditional use of KTHXBAI (even if it is misspelled)

And so, my experiment has come to an end. In the end it was sorta a drag as month after month passed with no one mentioning it. After I talked about it as an experiment everyone came out of the woodwork to say they had seen it and wondered what it meant, but didn’t bother to ask. Which leads me to wonder, how often does this happen? Do people even read my emails? Do they just ignore things they don’t understand or perceive as irrelevant? Do they do that to everyone, or just me? Could I start saying that we need to replace the fitzervalve on the flux capacitor in order to keep the keep the servers from frobnicating themselves and get away with it?